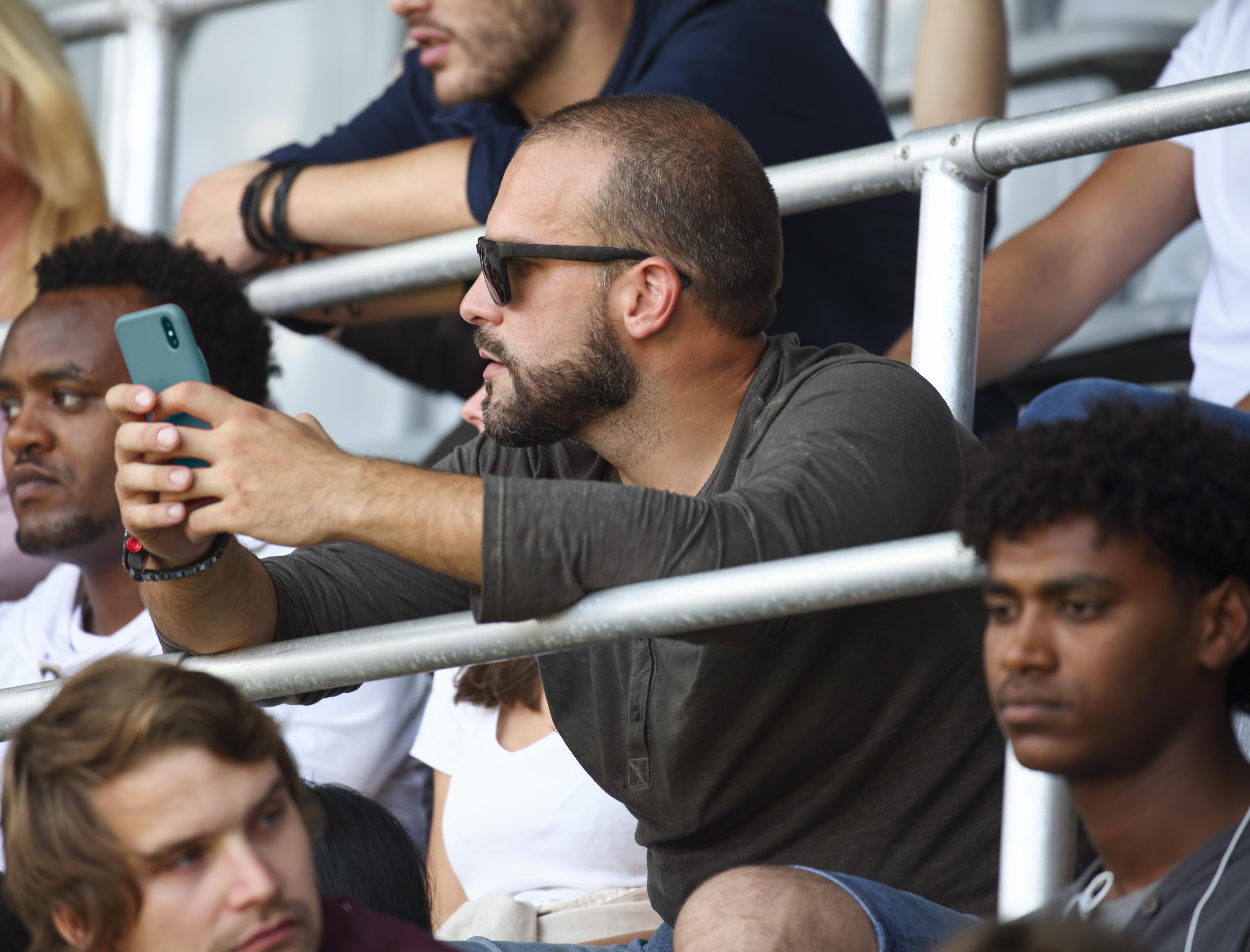 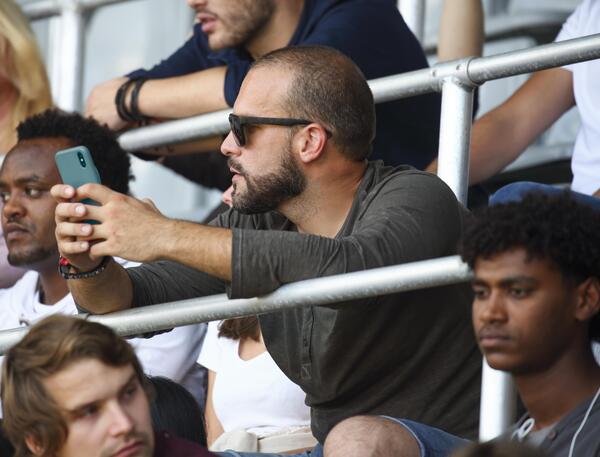 ● Globally, 19% of sports fans, and 40% of those in Europe, are set to follow the Euros with the numbers rising to 46% in Germany and Spain.
● Globally, the majority of Euros watchers browse social media while watching matches.
● Among audiences that follow the tournament, WhatsApp and Facebook Messenger are now among the top five social platforms.
● Euro fans in the UK are 40% more likely than the average sports fan to message people during events.
● 78% of Euros engagers also watch sports recaps or highlights on TV/online.

London, UK, June, 3, 2020 – As the sports industry prepares for a very different summer of competition, Mediaocean, the mission-critical platform for omnichannel advertising, partnered with GWI to launch new research to demonstrate how changes in engagement are set to give fans of the Euros the full experience, even without in-person attendance.

Speaking to 23,073 sports fans across 15 markets, this new research shows that 19% of internet users globally, and 40% of those in Europe (France, Germany, Italy, Spain and UK) follow the Euros. While this is a lower audience share than the Olympics, which draws 64% of users globally, the Euros tournament stands apart in the level of commitment and passion shown by its fans. Compared to the average sports fan, they’re 61% more likely to watch sports online every day. Olympics watchers, for comparison, are 21% more likely to do so.

“While the Euros explores a new format, taking place across Europe and with much reduced crowds, fans at home will be turning to digital and social media, both enriching their experience of live games and keeping up-to-date through always-on content.”, commented Aaron Goldman, CMO, Mediaocean. “2020 was a year when major events were delayed and people made all aspects of their lives digital-first. Brands and media companies followed suit, providing new ways to engage audiences across screens. When it comes to the Euros, there are many reasons why this will be a competition unlike any we’ve seen before, and the race to attract the attention of football fans will be hotly-contested.”

Dedication to the beautiful game

The research found particularly strong differences between Euros watchers and the average sports fan in the UK:

● 23% of UK Euros fans watch sports on TV at least once a day – around twice the rate of sports fans in general.
● They are also twice as likely than average to watch sports online on a daily basis.
● At 35%, Euros fans are twice as likely to place bets on sports while they watch.
● One fifth watch online recaps or highlights online on a daily basis.

Globally, 74% of Euros fans watch highlights or recaps on TV at least once a week, and 68% do so online at least once a week, showing the ways in which the tournament will spread its influence well beyond the time allotted for the matches themselves. While 49% of Euros fans say that they attend professional sports events, the 87% who watch sports on TV or online is closely followed by the 78% who watch recaps.

Goldman continues: “Seeing all the different ways in which people will interact with the tournament, and the breadth of activities they pursue while watching, confirms that broadcasters now need a really dynamic multichannel offering to give fans what they want. TV is more than just TV – it’s the conversations, the interactions, the catch-ups and the bonus content, everything that drums up the passion and excitement of people who love football.”

The opportunity in omnichannel engagement

Globally, a clear majority of Euros fans say that they browse the internet and use social media while watching games – at 61% each. In the UK alone, people planning to follow the Euros are around 20% more likely than general sports fans to browse social media during games. Numbers from the UK also highlight the strong community basis that football enjoys, with Euros fans being 40% more likely than the average sports fan to message people during matches.

When it comes to social media, the data shows that Euros fans in Europe are only slightly more likely than average to use platforms like WhatsApp, Facebook, YouTube and just as likely to use TikTok, an official sponsor of the Euros this year.

Goldman said, “It was a savvy move on TikTok’s part to sponsor the Euros and reach out in a way that can really expand its base and help cement its position after a meteoric rise over the last year. For marketers, this is the kind of detail that can really make a campaign sing: every detail of this research shows how the opportunity goes well beyond mid-game advertising to everywhere that consumers consume. Meeting fans where they are – including a new influx onto TikTok – is the bedrock of intelligent, effective campaigns. It’s also important to consider regional nuances as Twitter over-indexes in the US and Facebook in APAC.” 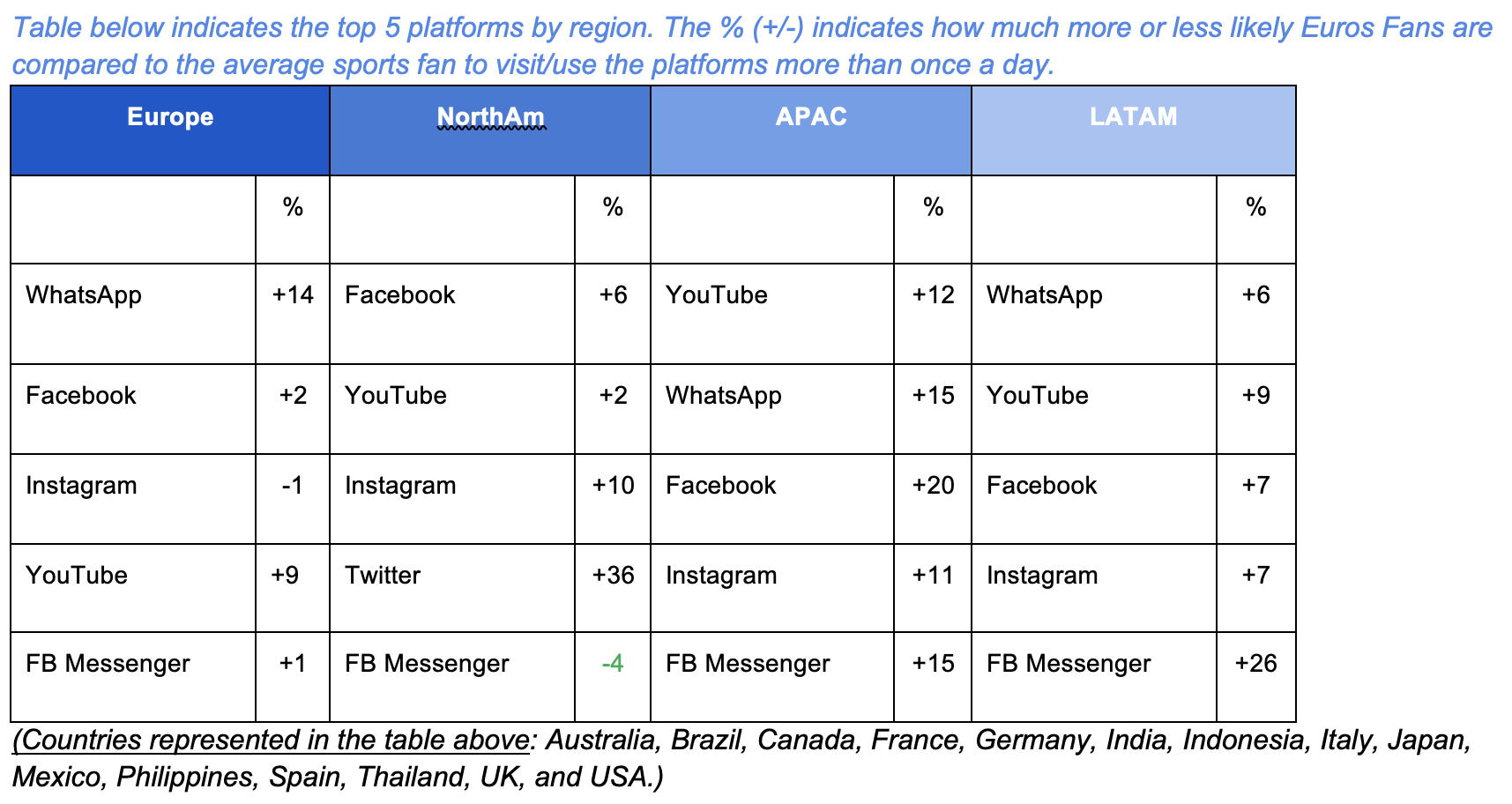 The research also confirmed that the tournament is a sizable opportunity for marketers. Globally, 43% of Euros fans say that they are more likely to purchase a brand or product which sponsors their favourite league or team, and 54% say that they are likely to think more positively about brands that do so.

“It’s exciting for all of us that banner events like the Euros are back on the table this year. Sports are a huge part of many people’s lives, and tournaments like this play a huge role in bringing people together”, comments Katie Gilsenan, Trends Manager at GWI. “This new GWI Sports data set shows how people will find ways to make the Euros a point of social contact even when meeting in person might be harder than usual. For businesses, success starts with understanding your audience and how people actually think and feel, and that makes up-to-date, trustworthy data a vital asset.”

GWI is a target audience company that provides consumer insight across 47 countries to the world’s leading brands, communication agencies and media organizations.

The company runs a global survey representing more than 2 billion connected consumers, which offers up over 40,000 data points on the behaviors and perceptions of internet users around the world. Using the subscription-based platform, clients including Twitter, Google, Spotify, WPP, IPG and Omnicom Group can gather in-depth insights into audience behaviors, attitudes and interests through a combination of survey data and analytics.

Among a range of leading data products available alongside its flagship survey are its B2B data set, GWI Work, which analyzes professionals across 10 global markets, and its TV reach and frequency solution, which enables advertisers to target previously untapped audiences.

GWI continues to evolve and innovate its data sets to meet the changing demands of brands. Last month (April 2021) GWI launched its new gaming data set, based on 19,488 internet users aged 16-64 who are also gamers living across 15 markets around the world. In July 2020, GWI USA was launched, responding to the increasing demand for more relevant and timely insight into the modern American consumer. Representing over 240 million people across all 50 states, the study tracks new and emerging trends not typically covered by traditional market research providers, including key questions around cultural identity, race and ethnicity.