A major Hollywood movie studio and distribution company was releasing one of its biggest films of the year. The marketing team knew that the celebrity star of the film would attract plenty of attention, but it wanted to make sure it was reaching the most interested movie-goers with its television commercials.

One of the key television partners for the marketing campaign, Turner Broadcasting, had used Mediaocean’s social audience targeting for Television solution before and felt that it was the right approach to bring to the studio’s marketing team. Using its award-winning affinity analysis, Mediaocean is able to optimize TV ad plans in order to maximize commercial exposure to the most engaged audience base for any brand.

Turner’s team worked with Mediaocean to develop a seed list of recent TV shows, movies, and celebrities that were highly relevant to the theme and genre of the upcoming film release. Mediaocean’s data science team then generated a list of anonymous social consumers who had higher engagement with the social profiles that were on the seed list.

The next step was to run an affinity analysis against this group of anonymous consumers to understand the Turner programming that they had recently engaged with via social media. Mediaocean’s proprietary algorithm was then used to score each of these consumers by affinity to refine the dataset.

Turner fed this information into its TargetingNOW product to create an optimized TV plan across its networks that would reach target audiences most likely to be interested in the new movie. 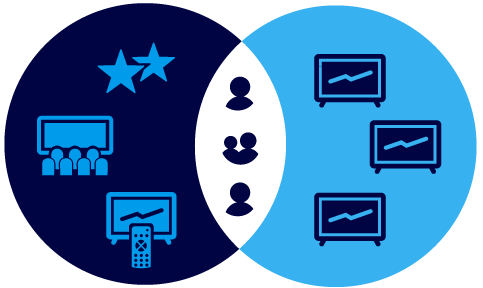 After the campaign ended, Mediaocean measured the social engagement with the film’s Facebook and Twitter profiles during the two minutes before and two minutes after each commercial ran across the entire TV plan. Engagement driven by the affinity-optimized Turner media plan was 3.6X higher than the other networks.

The movie opened with a big U.S. weekend, and, to-date, has a box office gross well over $130 million – more than 3X its budget.