One of the exciting things about working in marketing is the fact that what we do can have a real cultural impact. While we’re all focused on driving the right results for our brands, it’s always a great moment when advertising steers the national conversation and sparks debate in the office kitchen or in the middle of a Zoom meeting. Rarely is this potential clearer than in the UK’s holiday season, where – much like Super Bowl ads in the US – TV spots from the country’s big name brands are anticipated as events in themselves, heralding the joyous rush towards Christmas Day.

Here at Mediaocean, we’re backing up the media’s coverage of holiday ads with hard data, using our proprietary methodology to measure the social uplift of brands’ pitches to the public and the sentiment of the social media conversations around them in order to find out who really generated the most buzz for the year’s biggest shopping period.

While Coca-Cola’s annual ‘Holidays are Coming’ spot might be the most recognisable and reliable of Christmas adverts in the UK, it has for some years been supermarkets and high street retailers who have made the biggest splash on our screens. Retailer John Lewis, in particular, has cemented its place in the public consciousness with often tear-jerking creative that plays out more like a short film than a promotional piece.

This year, we saw a lot of new entrants to the top ten this year, including efforts from LEGO and Amazon – businesses that don’t fit the supermarket and high street mould which usually dominates festive marketing. 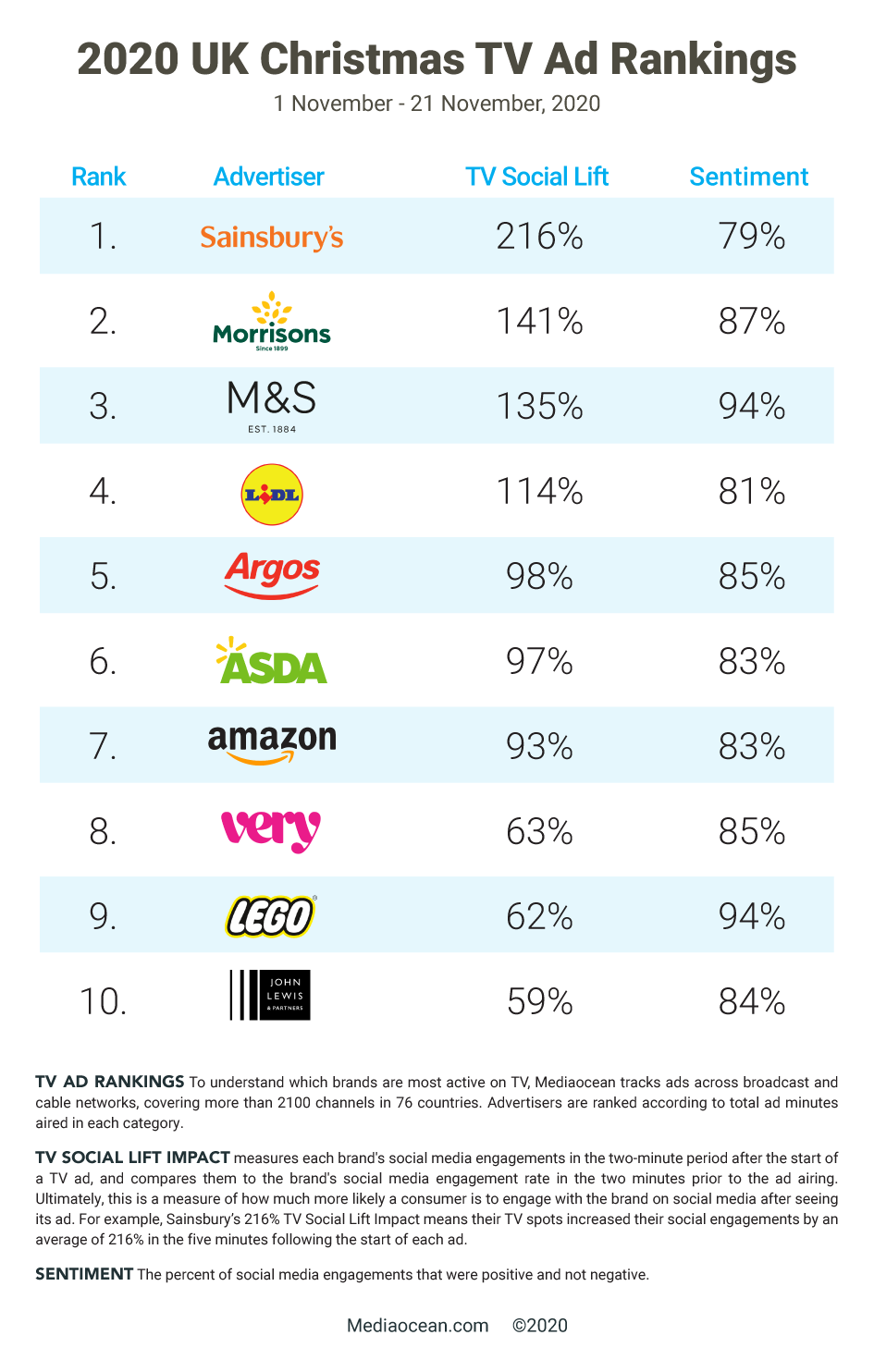 Of course, while Christmas adverts (and our close attention to them!) are an annual affair, this has been a year unlike any other. It’s hardly surprising, then, that marketers have taken different routes in their attempts to track the public mood, and that we’ve seen a lot of variation in the outcomes they’re getting as a result. To better understand why things played out as they did this year, it’s useful to map this data out on a tool we’ve developed, called our Ad Impact Barometer: 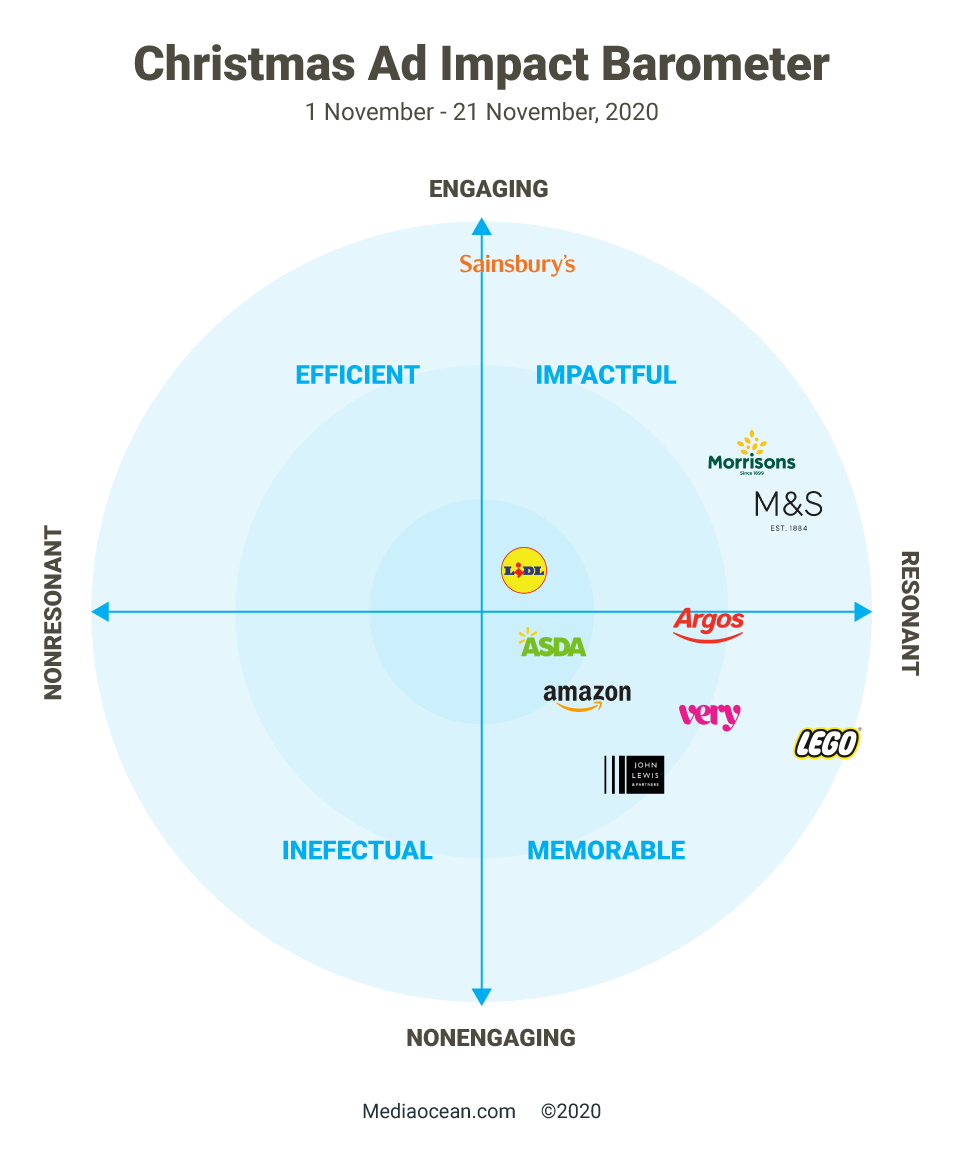 We know that attracting eyeballs is just one part of the equation for effective marketing; the viewer’s reaction also has to go in the right direction to achieve the impact we want, and by mapping attention against sentiment in this way we can get a clearer picture of performance.

Unsurprisingly, given that this is a top ten, all of these brands show up very nicely on the barometer. Within that cloud of logos, though, there are some interesting hints about how different tactics landed with the public. Sainsbury’s, for instance, also took a heartfelt route this season – but where John Lewis went high concept, the Sainsbury’s creative is more intimate, themed around phone calls between long-separated family members. Clearly, this paid off, with Sainsbury’s picking up by far the highest social lift of any brand.

Our two winners on sentiment, meanwhile – M&S and LEGO – both focused their ads much more squarely on the product at hand than a lot of their competitors. For M&S, this meant zooming in on a theme that their marketing has been honing for years: extreme close-ups of sumptuous foods accompanied by luxurious narration, in this case provided by actor and national treasure Olivia Colman. LEGO, on the other hand, went full song and dance with a technicolour rewrite of Louis Armstrong’s ‘What a Wonderful World’, neatly encapsulating the joy and surprise of their toys.

It’s never easy to sum up the mood of a nation in a line or two, but I think it’s safe to say that the UK has had happier and more hopeful periods in its history than right now. Watching through these adverts, and looking at the social reception they received, tells me a story of people craving intimacy and joy after months of, on the whole, quite bleak and distant news. The time for clever, arty creative will no doubt come again; for now, it’s all about a much simpler vision of love.

What do you think drove success in this year’s festive advertising season? It’s worthwhile taking half an hour out of your day to watch through them and think about how you might put some of these emotional tactics to work in your own projects. So, here’s a linked list to them all – and once you’ve worked through that, please register for our webinar on December 15th, when we’ll be discussing the thought processes, planning, and strategies behind these campaigns with Pete Johnson, Head of Creation at LEGO, Lynn Deason, Head of Creative Excellence at Kantar and Aaron Goldman, CMO at Mediaocean.