Media companies promote shows on their own networks and affiliates, as well as on a variety of cable channels and social media.

A major broadcast television network was interested in measuring the impact of TV promos and social engagement on driving tune-in and determining if there is an added value in using both together.

Mediaocean was well-positioned to deliver this analysis by combining data across TV and social media.

To determine the impact of television promotions and social engagement on actual tune-in, correlation and multiple regression analyses were run across the following datasets for 22 television programs across genres for a 30-day period.

This research indicates that there is a significant positive relationship between total social engagement and program tune-in for all genres other than news. 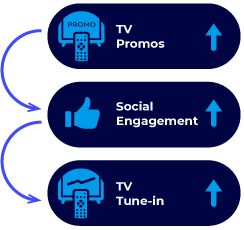